I had intentions long ago to finish this painting but somehow I kept getting side tracked by other obligations. Living near Asheville, NC has been always a delight because there is so much still yet to explore or try in our community. On many occasions I have thought about what it was like to live here many years ago. Simpler times. Asheville used to be a destination for the elite in its early hay day kind of a capital of sorts for the western counties.

My goal has always been to be able to paint a scene that expressed motion and commotion with people.

In search of old photos of the time period, I wanted to explore a scene that showed the hustle and bustle of the era. Could I accomplish it? Well, using my artistic liberties to compose a scene, it was a struggle.

Patton Ave is a main street that leads visitors to the center of the city if you were traveling from Charleston, SC, or from one of the outlining western counties. Patton Ave is home to many restaurants, shops, banks, and pubs so it still remains an active part of the city.

The Kress Building was built in 1928. This store originally had two large rooftop electric signs at each corner. The signs’ freestanding letters spelled out KRESS with incandescent bulbs. The store unfortunately closed in 1974 due to liquidation of the company. Many communities where a Kress building still stands have been converted into retail, loft style apartments because of the outstanding art deco architecture unseen anymore. Though this painting isn’t a direct representation of the building, it did have an impact on the economy of Asheville, NC in its hay day. You can see this building tower over Patton Ave on the right.

In reviewing photos taken taken back in the late 1920s, I settled on composing a scene that took a little something from every photo. Using my artistic liberty, I composed the following painting. Starting out with a dark underpainting, I wanted to create a certain type of mood, thus the rain/reflections. Working from the background to the foreground I was able to create the feeling of the hustle and bustle I was looking for. Everyone hustling about in the rain, with their umbrellas.

One of the greatest things about this street is the view of the western mountains, the Blue Ridge mountains. I have incorporated it as it would have looked in 1930’s before further growth and development of today. 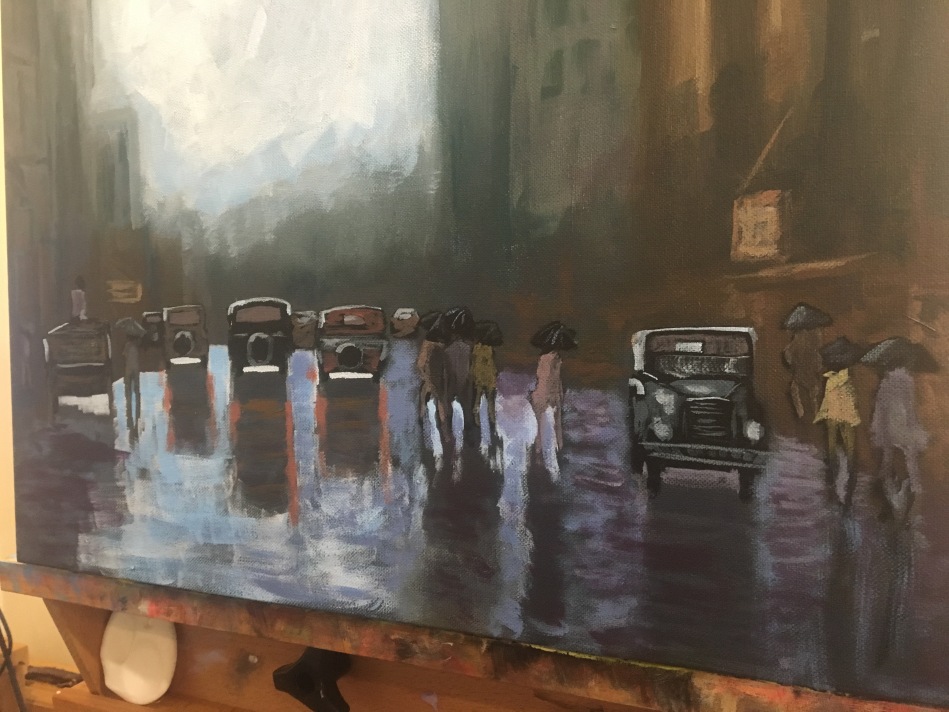 Painting time: 6 hours total. Though I worked slowly and took many breaks, it was necessary to take my eyes off of the painting for a while to assess any needs or additions when I returned.

After all the work, I am happy with the end product. I hope you enjoy this visit back in time.

Catching the Light and Action